Twin brothers Artemis and Apollo loved to play with each other back when they were still young, but many were usually worried whenever they would play, as they would always engage in dangerous games. One day, they just had the idea of playing with comets and meteorites that everyone hid so as to avoid from being hit. Zeus actually tried to stop them from playing such a dangerous game but he failed, and just resorted to hide too. Eventually they stopped, when they accidentally hit the precious golden shield of Athena to such an extent that the meteorite formed a solid band. Athena became furious and scolded the twin brothers. On the other hand, Hera found the solid band to be quite precious so she decided to cut that part off and keep it for herself. Athena could do nothing but watch, while the two culprits just giggled in the corner.

Our Gold jewelry is a thick 14k gold plated

Jewelry Care
To care for your jewelry and keep it clean and ready to wear, gently wipe off excess make-up and skin oils after each wearing. Use a nub free, 100% cotton cloth and gently wipe the piece clean using only the soft pads of your fingers.

Store all jewelry in a dry aria or the official La Hera Jewelry box or travel case. Never use chlorine bleach to clean jewelry.
Our gold plating is beautifully thick and of the best quality, we could make.

Gold plated jewelry does not have the same characteristics as solid gold. It is water-resistant, but water may wear off the plating faster. For long-lasting Shine, we advise removing jewelry when showering, swimming, and exercising.

I love the ring, it’s fits perfectly thanks to the adjustable size, it shines and is not to heavy. 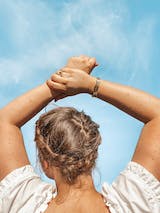 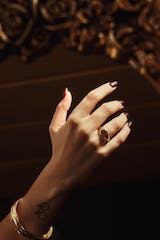 beautiful jewelry i am absolutely in love with it<3 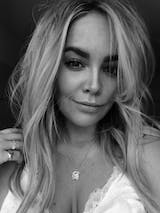